Overview: This section of the website contains a selection of articles that were salvaged from the old AreYouTargeted.com website just a few days before it was taken down by its author Jeremy Radlow who, based on statements he made in one of his final podcasts, was under some type of duress. The articles in this section are generally untouched and, as a result, still contain broken hyperlinks to the original (now defunct) AYT website. To view a complete list of the articles currently available on this website, click here or on the AYT "target" logo above and then scroll down. You can download a more complete and permanent backup of the original AYT website via BitTorrent here (need help?). 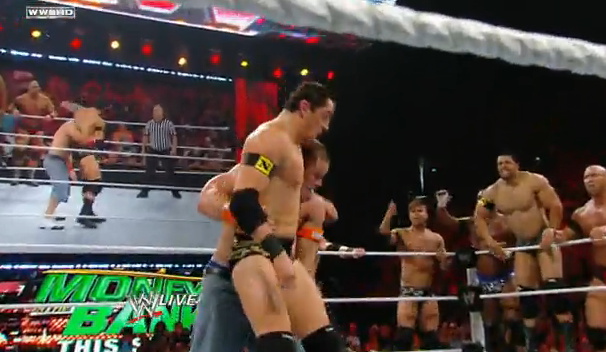 Unlike other sports fans, WWE followers are willing to admit they’re watching a staged event.

The general population is becoming increasingly receptive to the idea that the broadcast media outlets are, collectively, a fascist mind-control platform. As I’ve said elsewhere, the sensible thing to do is disconnect from it1.

In a modern television show, very little is left to chance, even when the show is “live” or “reality-based”. A reality TV program can be edited to make any character look bad (or good); a live program may have a studio audience, but the role of the audience and the players is carefully circumscribed, and the audience members get lots of prompting.

At any given time in a television program, the watcher’s attention is focused on a small handful of actors. Those actors have a very specific role to play. They’re telling part of a story, and the watcher’s mind stitches all the parts he sees into a coherent whole.

Similarities between television and group harassment

In an organized campaign of harassment, a show is staged for the target. Individual harassment episodes involving a handful of actors are carefully planned, and arranged so the target can see them. All those episodes assemble themselves into a message in the target’s mind.

What a target’s harassers would like him to believe is that the entire world has turned against him:

This phase doesn’t last indefinitely. Most targets eventually come to the conclusion on their own, or are led to the current consensus, that their neighborhoods, workplaces, and several major institutions are somehow turned against them:

Welcome to the Big Show

Very early in your ordeal, you may have been trained to recognize what mobbing looks like, by way of a handful of extreme harassment episodes2. Throughout the process, it’s likely you’ve experienced hostility everywhere you go. Your mind has filled in the details, with increasing sophistication, as your campaign progresses:

Once you’ve been made aware of the concept of totally undetectable technological mind control, there’s another explanation:

How The Big Show works

When you’re watching a television program, you have volunteered your eyes and ears; everything you see and hear is therefore under the control of the television programmers. This paradigm has simply been transplanted to the real world, thanks to the use of more advanced technology.

To your handlers, you (and the people around you) are characters in a video game.

You are volunteering your eyes and ears, right now. The miniscule electromagnetic emissions from electrical activity generated by your senses are broadcast to the world, for anyone with the right equipment to pick up3.

Not only that, you can be subliminally commanded (without your knowledge) to go certain places, or glance in the desired direction, so you can observe things your handlers want you to witness.4 And those events themselves could have been arranged by individuals subliminally influenced by your handlers, or by a handful of agent provocateurs operating out of your neighborhood’s stalking operations center5.

You’re not just a witness to a staged production; you’re a participant, against your will. Your reactions to the harassment you perceive, while reasonable to you, seem mystifying to the people in your life. For them, the simplest explanation is that you’ve gone off the deep end.

The Big Show probably doesn’t explain everything you’ve experienced. For example, mobbing is instinctual behavior6; and powerful people may knowingly send an organization after you to protect themselves.7. But in my opinion, only the Big Show can explain the seamless and highly sophisticated psychological warfare tactics that follow you everywhere.

Coping with the show

Much of the advice in the "psychological defenses" and "the privacy issue" sections is very appropriate for this situation. It’s important not to allow yourself to be recruited as an actor in this show. And it’s also important to recognize that even though the organization after you knows every conceivable unflattering detail of your existence, practically nobody else does; the public’s perceptions of you are still under your control, even if it doesn’t seem that way right now.

It’s time to begin meeting the general public half-way. You need to come to terms with how you’ve been deceived. And the public has to admit you’ve been blindsided by a system neither you, nor they, could reasonably have expected to exist.